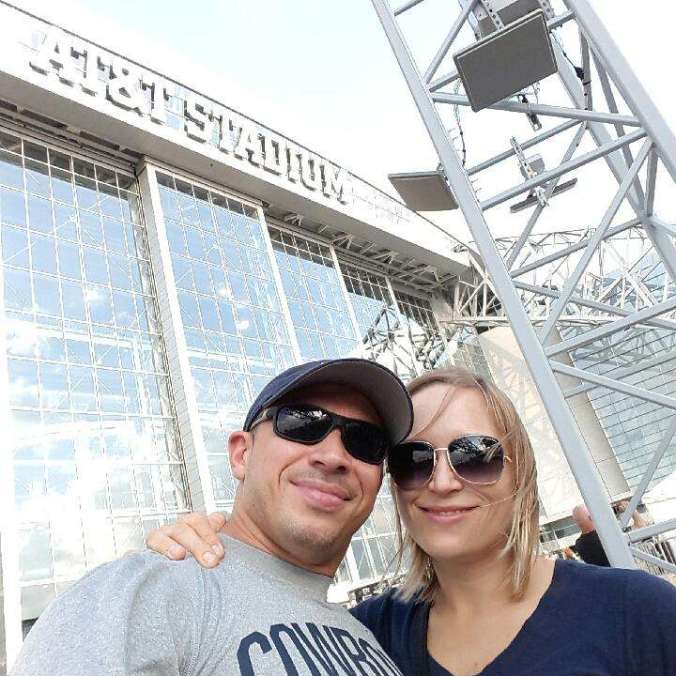 What could possibly go wrong, you ask?! Well, first of all we had to find a new room at the last minute, but after we checked in. Talk about a shady part of the city. Non-refundable, so we would eat the cost.

We did get another room though. We drove up and the parking lot is full of normal looking people and normal looking vehicles!! So, off we go. We used the shuttle at the hotel, and arrived at our destination within minutes. We were three hours away from kick off. As soon as we shut our doors, and as our driver was taking off, Cisco says, “I don’t have the tickets.”

We couldn’t call her quick enough, and we couldn’t get her attention either. Trust me, we were mad men waiving our hands around in an effort to grab her attention. She was going to turn right back around, NOT! She tried, got stuck in traffic, misunderstood where she was picking us back up at, and thought we were saying we left our tickets on her back seat. However, they were in our truck back at the room! We waited an entire hour, but we were finally picked back up, taken to our room where we grabbed our pre-season Cowboy vs. Texan tickets, and back to AT&T Stadium we go.

Once inside, we were so excited, walking around like little kids and taking pictures of everything. Selfies here, selfies there. Oh, look, a gift shop! 20 minutes passed, and it’s time to get to our seats. BUT, where are the tickets?!! I did not have them. Cisco did not have them. He back tracked our steps, and thank God they were still on the sofa lounge where I was just sitting. Even though we were already inside the stadium, we did not know where our seats were.

Who cares that our team lost, it was awesome!! We could see everything from up there, birds eye view!! Our seats were at the top. You would think that is where the night ends. But, no. We had one phone between the two of us, and we got separated for almost an hour and took the shuttle home each of us by ourselves. Only some how I get to our room first, and my key won’t work. Finally we catch up with one another, and we hit the sack. What a day!!

Incredibly we are up early as heck the next morning, and out the door even. It was an hour of being on the road, I’m driving this time, and I look to Cisco and ask, which card did you use for the second room when you got into my wallet. I just barely remembered my cards being moved around and I felt a little uneasy. Turns out he used my work credit card, so we called the hotel immediately, but they couldn’t take a card over the phone. So we turned around and went all of the way back and also decided to stay another night. Had to get a different room though, because they were full.